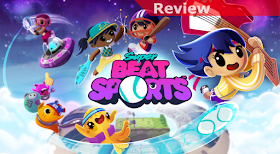 While there have been a few music and rhythm games on the Switch to this point, with the notable Thumper making quite an impression, none of them have been quite like Super Beat Sports. Consisting of 5 distinctive mini games that you can play alone or with friends (in some cases up to 3 of them), it is a refreshingly upbeat but challenging collection of both cooperative and competitive modes. However, for me there’s one specific rhythm and action game in the pack that stands out and makes it shine.


Starting with the basics you have the more straight-forward rhythm games you can play by yourself or with a friend cooperatively. These start with the baseball-themed WhackyBat. Here you’ll be thrown baseballs from a variety of characters that all have different styles you’ll need to get used to and hit them back matching the rhythms they threw them in. As you get into new stages you’ll have to contend with changing lanes, having multiple characters stacked in the same lane and throwing balls at different times, and a close-out pitcher who throws some nasty trick pitches that you’ll need to be prepared for. Next is NetBall, modeled on Volleyball, and this time you’ll need to be ready to focus as the ball moves around in specific rhythms and could be hit to you at any time. Here the patterns are generally more challenging and sometimes it’s hard not to get caught by surprise when it suddenly is coming your way. Closing out we have GobbleGolf which is more like matching up a rhythm game with the classic Simon, not just matching beats but also remembering which group of monsters each beat belonged to. All of these can be played with a friend and doing so really changes them up quite a bit, leading to new variations and strategies where you’ll need to work together. As a whole these are all varied and challenging.

Moving on to the other 2 games that are more competitive it starts with the pretty rapid-fire and tricky RhythmRacket. While it all typically starts out pretty slow and controlled once the random power-ups start making an appearance things can get crazy and hectic in a hurry. Depending on where the randomizer stops you could end up dealing with a number of things from bombs (making everyone avoid hitting the ball to that spot) to a power-up that will “nubzify” the action which essentially means all hell is going to break loose with ridiculous speed. It’s not complex but it is fun and can make for a lot of competitive people yelling at one another. That leaves the final game, the one that I consider the crown jewel of the package, BuddyBall. While it may be the least rhythm-based of the bunch in terms of feel it is this mode’s mixture of air hockey, tennis, pinball, and I suppose breakout at times that makes it an unpredictable blast. You and your opponents will be in front of your respective goals you’re trying to defend against a ball that will fly around the field. What makes it crazy is that the play area continues to change and evolve over the course of the match with a wide variety of obstacles. It will take a mixture of strategy, precision, quick reflexes, and a bit of luck to be successful in this mode and in practice matches are like nothing I’ve ever played before. 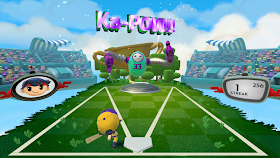 In terms of issues I’d say that the list is short, especially keeping in mind this isn’t a title that will break the bank. Obviously if you’re someone who doesn’t have a sense of rhythm you’ll want to take a pass. While you could certainly try to play the game based on visual cues once the action gets rolling you will really need to be able to stay on the beat or you’ll be sunk. Overall I’d say that the game is more enjoyable with more people than just yourself but play is possible by yourself, even in the competitive modes against pretty competent bots. Of course the problem is you then lose the opportunity for jawing at each other and having some laughs but the game can be fun by yourself. Just probably not as fun as if you had someone (preferably well-matched to you in terms of capabilities) to play them with.

Overall, I really have enjoyed the time I’ve had with Super Beat Sports and would easily recommend it to anyone who enjoys a good rhythm game. There’s a reasonable variety of playstyles, a load of levels to complete (including Pro levels that amp up the challenge substantially), some entertaining unlockable costumes and implements to hit the balls with, and some simple but catchy music that helps you feel the beat. Specifically, though it requires the least sense of rhythm of the bunch I found BuddyBall to be a real highlight and a competitive game my friends and I will likely continue to return to for its variety and creativity. Harmonix has really hit it out of the park with this relatively simple but well-executed collection of mini games! 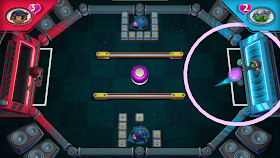